Otome junkie An Otaku FanGirl's Blog of All things Girly, Nerdy and Fun!!

I guess I’ve been so busy that I didn’t even realize that some second sequels to this game were out! So when I looked and saw, Wilfred and Keith’s Wedding Sequels up I was ecstatic. I had called in sick for the weekend because I got a fierce cold and I have been coughing up a storm. So this was a great opportunity to lay in bed and play the sequels! I’m not a big fan of Wilfred so I picked Keith’s first.

Keith’s Wedding Sequel was purchased through the Be My Princess App in the Sequel’s section under the tab “Second Sequel”. I t cost me $2.99 for the 5 chapter story and depending on the choices you make it results on either a ‘Good Ending’ or a ‘Happy Ending’. You also receive a mini epilogue after the happy ending, 5 emails and 2 reward pictures.

He really is! Keith ❤

It took me quite a few attempts to get the happy ending, for reasons I will give in the Review portion but eve after playing Wilfred’s Second Sequel I believe you have to get only one answer wrong or get ALL answers right to get the Happy Ending. So especially with the Technical errors in this Story it may be difficult for you to achieve a happy ending in the first few attempts.

Here are My answers.

He is so damn cute in this story!!!

is something definitely technically wrong with this whole story, which was really frustrating and disappointing. I cant quite explain it but it seems that perhaps the coding was messed up somehow and the timing for the questions, the script and the sprites are way off. The questions seem to pop up at the wrong time, and even after the answers come up; For example: the Script says… “Kerian: Thank you for coming to pick me up.” and then some other dialogue comes up then all of a sudden your given the Question: 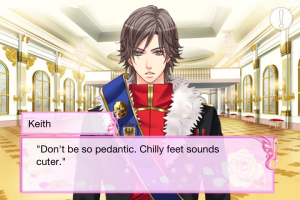 And he only gets cuter!!

It’s weird right? especially when It already said that you said “Thank you for coming to pick me up”. This happens for EVERY choice that you have to make in this story. Also at certain points it seems like the Dialogue is about 2-3 clicks ahead of the pictures/sprites. Roberto would be saying something but at that moment Glen and Joshua are on Screen. And the moment he’s done talking his Sprite is on-screen while Edward is talking. I really that something gets done to fix these problems in this story, because honestly I’ve never encountered so many big technical problems in any of voltages games before. And I would like to stress that it is a huge shame because the content and storyline is my FAVOURITE of all Be My Princess stories!

This has to be my favourite scene…

All those  technical problems I was having I really enjoyed the storyline and Keith’s personality in this sequel especially.  Although he is still quite arrogant and selfish he seemed as if he has grown a lot sweeter and happier and a lot more playful in this story.  His merciless and cold insults that I liked before but still made me feel distant from him became much more playful and teasing in this story. You can tell that your relationship to Keith is getting more intimate and loving. The way Keith acts around me in this story makes me feel so happy, This kind of playful teasing and easygoing relationship is something that makes me feel really good inside, ESPECIALLY because it is with the usually angry and insulting Keith. The way the happy ending played out made me the happiest girl in the world! It the wedding was so perfect and Keith acted like the perfect husband in the end in my opinion. Even he can be a huge romantic!

His Emails were so adorable I don’t think I can even delete them  and his pictures were both amazing as usual. They both stole my heart away, but this is expected of Be My Princess Pictures, they are the best picture of all the voltage games. Overall although this story’s coding or something needs to be fixed so that people can play it properly this route I definitely am happy with the story. I loved it to bits and its a shame that it has so many technical errors. I am pretty easygoing and was able to go through the whole thing without getting thrown off too much so I still enjoyed playing it, however I know there are others out there who wont be able to tolerate those kind of errors.

I loved this sequel so I hope that even though it is “broken” in a sense that if you like Keith’s story you will play this. It is his best story in my opinion and a few technical errors cannot change how much I really love This story!

Get ‘Be My Princess’ for free here for Apple Devices or Android Devices.